How to Build a PC: CEG’s New Testing Rig

By Ryan B. Gaming No Comments

Over the past few years, PC gaming has become an even larger competitor to console gaming. In 2017, the PC gaming industry hit $28 billion in revenue and that number is projected to climb to just under $34 billion in 2020. Unlike the ready-to-play out of the box console competitors, Xbox & Playstation, PC gamers are unique in that their systems are built to their own design and to perform according to their own specifications. While having to build a PC can seem like a daunting task and could serve as a barrier to entry into the world of PC gaming, it’s honestly about as difficult as putting together a LEGO set. In this article, we will walk you through our very own PC build in order to show readers that building a PC is rather easy, and the results are more than worth the effort.

Step one is the most important part of the whole process: determining which components you will buy for your PC build. Builds can range from a budget low-end PC to ultra high-end overkill, but it’s important to craft a build that 1.) is comprised of components that are compatible with one another, 2.) meets your performance needs and budget, and 3.) is aesthetically pleasing to you. Here at CEG, we like to recommend the website PC Part Picker, a source that will help you build a PC from scratch and tells you whether or not your build components are compatible. Your build will require the following components at minimum:

Once you have your parts, it’s time to start the build!

There’s a couple of ways to do this step: 1.) Attach the CPU, CPU fan cooler and RAM to the motherboard before installing the motherboard inside of the case, or 2.) install the motherboard first and then attach the other components. The first way is typically easier because you don’t have to be bent over your case trying to screw/unscrew things from an awkward angle. For our purposes, we re-used the case from our old testing rig for the new build and already had our power supply & HDD installed, so it was easy to drop the motherboard into the case and start connecting. As you can see from the video above, installing the CPU is very easy. First make sure you properly align the CPU with the socket on the motherboard, for these Ryzen CPU’s there is a small triangle indicator on both the CPU and the socket which indicates the proper orientation for the CPU. Next lift the little latch on your motherboard, slot in the CPU, and press down the latch. Make sure that the CPU is snug – otherwise this will cause you major headaches down the line.

Next we’ll install the CPU cooler shown in the short video above. Most CPUs come with a CPU cooler nowadays, but they are available for purchase separately if yours does not or if you want to spice up the aesthetics of your build with a fancy RGB LED one. For our build, we went with the AMD Ryzen 9 3950X which is the only Ryzen 3000 series CPU that does not come with a CPU fan cooler, we used a CPU fan cooler that we had on hand from a AMD Ryzen 5 3600X that was compatible. To install the fan, you must first remove the brackets on your motherboard (pictured below). 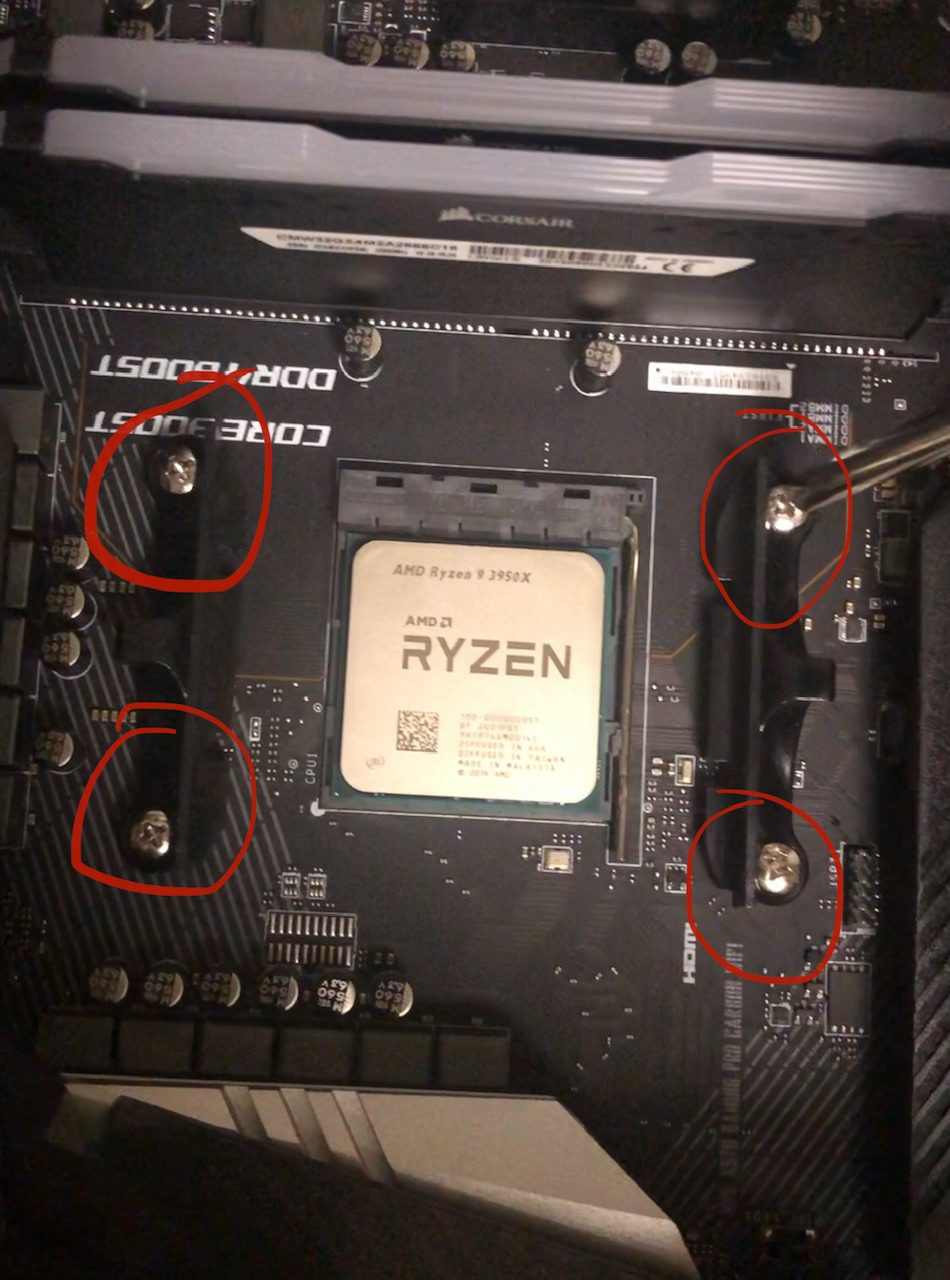 With the CPU and fan cooler installed, it’s time we connect the RAM to the motherboard. RAM is probably the easiest component to install and simply pops in to the allocated slots (see video below). Three important notes when installing RAM are that most motherboards have slot configurations for multiple sticks of RAM, meaning that it matters which slots you place the sticks in. For our motherboard, the MSI MPG X570 Gaming PRO Carbon WiFi, the optimal slot configuration is A2/B2. The slots should be clearly identified on the motherboard. Additionally the RAM only installs in one direction, to make sure you slot it in correctly make sure the pins and cut out on the RAM lines up with the RAM slot properly. Finally, don’t be afraid to push with some force, RAM often causes issues if not installed snugly.

The next step in the build process is to add the power supply and SATA storage. As we mentioned earlier in the article, we decided to reuse the case, power supply and SATA storage from our old testing rig for the new testing build. Because of this, we did not remove them from the case when assembling the new build. As you can see in the picture below, the aforementioned components are secured to the case in their correct places and the appropriate cables have been connected. This video shows the step-by-step process of installing the power supply, and this video shows the installation of the SATA storage. Once the power supply and storage have been installed and the appropriate connections to the motherboard have been made, it’s time to install the graphics card. 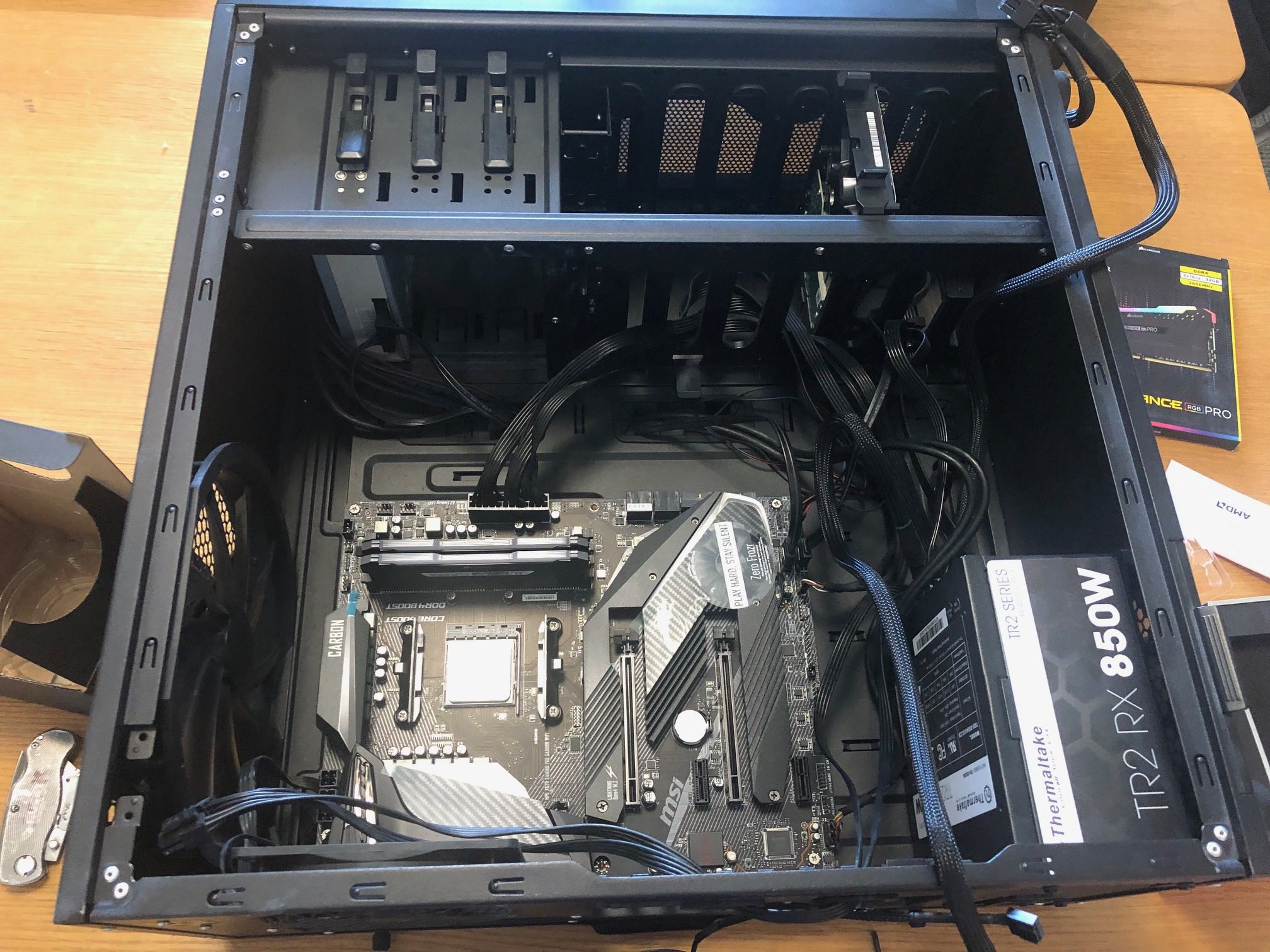 Installing the graphics card is the last step before powering on your new PC build. Take the GPU and line it up with PCIe slot on your motherboard. Carefully place the GPU in the slot until it “clicks” in place and feels secure. Next, take the PCI-E power cables connected to your power supply and connect them to the GPU. Depending on the GPU, the number of PCI-E connections can vary from as little as 8 to 24-pins. Take a look at the video below for assistance installing the graphics card.

In order to use your new PC, you will need an operating system. We went with Windows 10 as it is the industry standard.  To install it, you will need to create a Windows installation USB. Here is how you can create one. Grab an empty 16 GB USB thumb drive and head to a computer with internet access.  Next, open your preferred browser and follow this link: https://www.microsoft.com/en-us/software-download/windows10 , to find the Windows 10 installation media tool. Simply click “Download tool now”, wait for it to download fully, and then start the program. It will be labeled MediaCreationTool or something similar. Once started, you need to click “Accept” for the applicable notices and license terms, and then you will see the option to “Create installation media”. Click on it, hit “Next” and then select the proper Windows version for installation, based on your preferred language and system compatibility. Click “Next” again and select your USB flash drive as the media to use. Click “Next” one more time, then you should see the progress as it installs, and you will just need to click “Finish” when prompted. From there your USB drive is ready to go.  To use it, plug it in to your new PC and power on the computer. Next you will need to enter your PC’s boot-device selection menu in your motherboard’s BIOS, typically by pressing F2, Esc, F10 or F12 when your system is booting up. Once at the menu, you can select the option that boots the PC from the USB flash drive. That will start the Windows Setup and just follow the prompts you receive to install Windows. Once you do that you will be up and running in no time!

Congratulations, you’ve completed your PC build! Don’t be alarmed if the PC doesn’t boot up the first time you try turning it on – it happens all of the time during new builds and there are plenty of PC diagnostic resources online. While it may seem daunting at first, building a PC is a fairly simple process and is incredibly rewarding when done correctly. The customization provided by PC gaming is unparalleled and current trends seems to indicate that the PC gaming community is only going to continue to grow.

DudeBrd. (2016, August 4). How to Install a Power Supply in Computer [Video file]. Retrieved from https://www.youtube.com/watch?v=VOsrsHC4CMk

Digital Trends. (2015, May 20). How to Install a SATA Hard Drive [Video file]. Retrieved from https://www.youtube.com/watch?v=NjfRYfN4jfM

Charles S. | Gaming | No Comments
We have recently been hard at work putting together this list of manuals for all of you to use. Here they are, all the GPU installation guides you could want.…

How to Build a PC: CEG’s New Testing Rig

Ryan B. | Gaming | No Comments
Over the past few years, PC gaming has become an even larger competitor to console gaming. In 2017, the PC gaming industry hit $28 billion in revenue and that number…

Price: Around the same as current line up

Currently most graphics cards distributors are emptying their stock of RTX 20XX series cards, it seems like they are finally preparing for the RTX 30XX series Ampere launch. There are rumors of August mass production and a September release for the newest best GPU on the market a RTX 3080 Ti and possibly even a RTX 3090.

The speculated specifications expect these new GPU’s to be clocking up to 2.2GHz, boasting 21 TeraFlops of raw performance and 18Gbps making it 40% faster than 2080 Ti. All to go with possibly 20GB VRAM and PCIE 4.0 support. These graphics cards are expected to boost performance, and increase power efficiency significantly. Plus new DLSS, could mean you can get to buttery smooth 4K with a midrange card – 3060 anyone?

We originally expected an official release date to be announced at either Computex(September) or Gamescom (August), but by now Computex has been officially cancelled. So now expect the RTX 30XX series reveal either at Gamescon, which moved entirely online, or NVIDIA may even do there own private launch event in August. Either way with stock of RTX 20XX series running dry, and rumors of Ampere production ramping up in August, we expect new RTX graphics cards to be available in September.

We expect them to be priced roughly the same as the current line up, with 3070’s around $500, 3080’s around $700 and 3080Ti’s/3090’s at around $1200. Previously there was a jump from the GTX 10XX to the 20XX series because of a lack of competition, the Turing GPU’s ran unopposed until Radeon VII arrived the February after its release. But with Big Navi expected soon competition forces NVIDIA to keep prices roughly the same for this new line up. Also it is speculated they will use Samsung 7nm EUV production to reduces cost to manufacture the graphics card. Typically Taiwan Semiconductor Manufacturing Company (who you may know as the also produce chips for both Apple and AMD) manufactured NVIDIA’s cards, but they are apparently not as competitive price-wise right now.

We use cookies to ensure that we give you the best experience on our website. If you continue to use this site we will assume that you are happy with it.Ok