How to Properly Clean a Graphics Card

These are the items you will need to properly clean and test a card:

All of them are visible in the gallery to the right in case you are at all confused.

To the right you will see the technique you should use to clean the graphics cards with compressed air. We have images for both the blower and aftermarket style coolers as well. Use the canister first and spray the air in wherever you can see an opening, just be careful not to hold the can upside down or you will shoot out coolant which is not good for the card. Additionally the can itself will get extremely cold in your hand. Make sure you use the compressed air first to get all the dust off before going in for a deep cleaning with the pipe cleaners. You’ll want to bend them to make sure you can get all the dust from behind the fan blades and any other hard to reach spots. This should clean most cards.

For a Deeper Clean

To the right you will see a method for getting any sort of grit or grime off your card. Use gloves if it gross, you should be able to get similar ones at HEB or CVS. You will want to use Isopropyl alcohol since any water will damage the card. Be careful with is and only use a dab on a dab, as pictured to the right. Then just wipe down the dirt or substance and it should come off quickly. You can use the Q-tips if there is any stain that is harder to reach with the cloth. That should cover all the steps to properly clean a card. 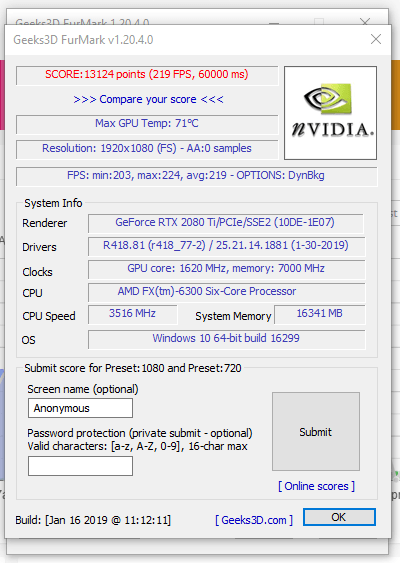 Once you install it, you can open the program from your start screen and run one of the tests by clicking the preset test button. In this example we used the preset 1980x1080P. You can see the results of our test for a RTX 2080 Ti in the image to the left. There you will see the temperature, FPS and other specifications for your system which you want to know. Check to make sure you’re card is performing up to specs by comparing the results you get to Furmarks you find online for the same card. We here at CEG hope these tips help you!

With the launch of the RTX-series graphics cards, NVIDIA has cemented itself as the premier GPU manufacturer in PC gaming. The RTX 2080 Ti is the most powerful GPU in gaming, boasting unprecedented performance utilizing NVIDIA’s new Turing architecture and ray tracing technology. Gamers around the world are spending big money to upgrade their systems to include NVIDIA’s latest and greatest GPU, but how does it compare to the king of old – the NVIDIA GTX 1080 Ti? In this article, we will discuss the differences between the two cards, and explore whether it is an absolute necessity to upgrade.

When it was released back in 2017, the NVIDIA GTX 1080 Ti was an absolute game changer. At the time, the 1080 Ti provided gamers with the biggest performance jump between Ti cards ever seen, with some estimating an increase of up to 35% over the previous generation’s GTX 980 Ti. Such an absurd performance increase makes it easy to understand why the 1080 Ti was (and continues to be) such a beloved GPU among gamers.

With this in mind, consider how insane it would sound if you told a gamer back in 2017 that an even more powerful card – capable of performing 30% better than the reigning king of GPUs – was merely a year away. The release of the RTX 2080 Ti was met with even greater enthusiasm than the 1080 Ti, and it currently dominates the PC gaming market. So how do these cards compare? Let’s take a look at the chart below.

As you can tell from the chart, the RTX 2080 Ti boasts improvements in nearly every specification over the 1080 Ti. CUDA cores have increased by nearly 1,000 cores from 3,584 to 4,352. This increase is astounding in its own right, but even more impressive is the addition of new RT and Tensor cores to the 2080 Ti. The new RT cores help to push the boundaries of the GPU’s graphical capabilities, and allows for the card to render images using highly anticipated ray tracing technology. The tensor cores work to more efficiently process anti-aliasing (smoothing) of images using artificial intelligence (AI).

In terms of clock speed, the 1080 Ti actually has a higher base clock compared to the RTX 2080 Ti (1,481 MHz vs 1,350 MHz respectively) but the real difference is in the boost clock. The 1080 Ti has a 1,582 MHz boost clock which is excellent and still measures up alongside many of the newer models of GPUs. Despite the impressive boost clock of the 1080 Ti, NVIDIA’s RTX 2080 Ti speeds past it. Thanks to a 90MHz factory overclock, the 2080 Ti reaches a max boost clock frequency of 1,635 MHz!

The 2080 Ti also comes packed with 11GB of GDDR6 video memory compared to the 1080 Ti’s 11GB of GDDR5X. The GDDR6 has lower power consumption and draws slightly less power than the GDDR5X. The memory speed for the 2080 Ti is also considerably higher at 14 Gbps (gigabytes per second) versus 11 Gbps for the 1080 Ti. 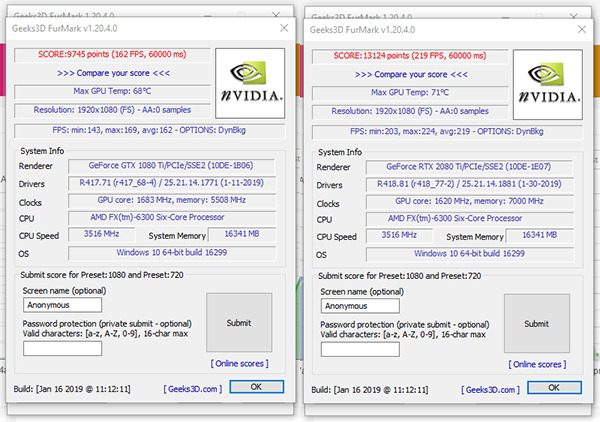 Performance-wise, the 2080 Ti leaves the 1080 Ti in its dust. This is not a slight against the 1080 Ti (which remains a considerably powerful card) but more a testament to just how powerful the 2080 Ti truly is. The 2080 Ti passes the 4K/60 fps test when games are played on ultra settings, with some games reaching 100+ fps! Furthermore, the 2080 Ti also draws less power than its 1080 Ti counterpart, although it does reach higher operating temperatures.

Setting the RTX 2080 Ti aside, the 1080 Ti is still an extremely high-performing GPU. Many have compared the 1080 Ti’s performance to the non-Ti RTX 2080 model, and they do perform very closely. However, the 1080 Ti runs on NVIDIA’s old Pascal architecture while the RTX 2080 utilizes the new Turing architecture and ray tracing. This allows the 2080 to perform tasks faster, and also provides higher processing capabilities.

Looking at the FurMark scores posted above, one can see the significant performance gap between NVIDIA’s two GPUs. Some have claimed that running two 1080 Ti cards in SLI can produce similar (some say better) performance than the 2080 Ti, but that is mostly untrue. First of all, many games do not support SLI. Secondly, there are scaling issues with running SLI between two cards that often affects performance. In most cases, it is better to run a one card setup, and as the RTX 2080 Ti is the most powerful single consumer card money can buy it is your best option.

The 2080 Ti comes at a steep price, but how does it compare to 1080 Ti cards currently? To get your hands on a new 1080 Ti, you’ll still be shelling out around $1,000. Availability for new 1080 Ti cards has become increasingly limited ever since the launch of the RTX cards while popularity for the cards hasn’t diminished. This has contributed to the static pricing of the 1080 Ti model cards. You can find used 1080 Ti’s for ~$600, but even then a new RTX 2080 card of comparable specs can be purchased for nearly the same price. And as we discussed above, the RTX cards run on the new Turing architecture which allows for the ray tracing features to be utilized – something that the 1080 Ti cannot do, and something which can help you future proof your new PC. 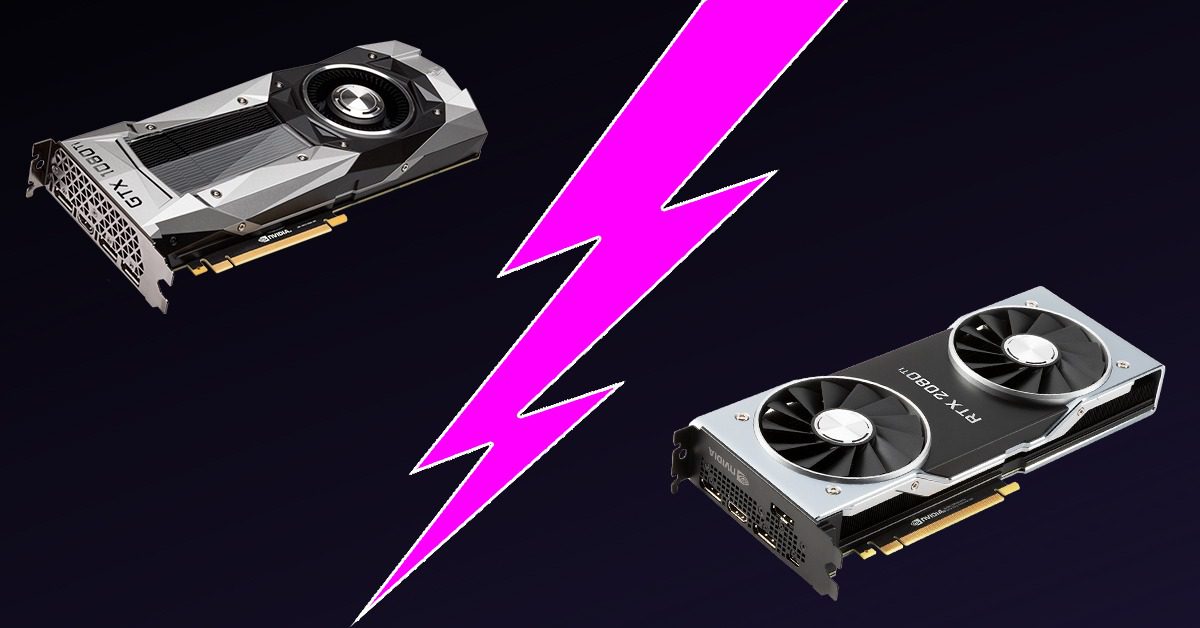 So what have we learned? While the RTX 2080 Ti has proven to be a drastic improvement over its predecessor, the 1080 Ti continues to display enduring success and is a favorite GPU among PC gamers around the world. The 1080 Ti was an industry-leading game changer when it first arrived on the scene, and has set the standard for what graphics cards are capable of doing. Its high-performance, sleek design, and overall quality has solidified its place at the forefront of PC gaming. Pricing continues to be high for a new 1080 Ti card, and graphics cards of similar performance, namely the RTX 2080, are significantly cheaper.

The 1080 Ti will always have its place in PC gaming history as one of the cards that changed the game, but even still, the RTX 2080 Ti is such a vast improvement. If you are looking to upgrade your GPU but are frightened by the price tag on the 2080 Ti , but do not want to compromise your performance, we would recommend take a look at getting yourself a 1080 Ti.