The PC vs Console Gaming Debate

Over the course of the video gaming industry’s nearly four decade history, video games – and the companies that produce them – have diversified in their uniqueness and creativity. As the popularity of video games has grown, so has the number of mediums on which they are played. Today, gamers have a wide range of choices to consider when selecting the best platform most suitable for enjoying their favorite games: Playstation, Xbox, Nintendo, & more. In addition to theses well-known, more traditional home-entertainment consoles, PC gaming has grown significantly in recent years. The growing selection of gaming platforms has led to a schism among gamers centered around one integral question – which is better: console or PC gaming? Some extremely passionate debate has spread throughout the gaming community regarding this topic, and in this article I will discuss some of the similarities and differences that makes PC and console gaming truly unique experiences.

Graphics in video games have come a long way over the years. Gone are the days of block-y pixelated landscapes and textures, and in are the hyper-realistic real world simulations. Most modern gaming platforms are capable of outputting amazing graphics, but what sets them apart? While the Nintendo Switch can produce some good-looking games, it prioritizes quality games and playability over graphics. Leading the consoles in terms of graphics output is Microsoft’s Xbox One X and Sony’s Playstation 4 Pro. Of the the three main home-entertainment consoles, these are the most powerful machines. Both consoles are capable of producing producing high quality textures and details at high resolutions while also possessing the capability of outputting in 4K. Of the two, the Xbox One X is the more powerful machine. It doesn’t suffer from dynamic scaling issues that the PS4 Pro has been known to suffer from, and it often runs the same games at higher resolutions. So to recap, Microsoft’s Xbox One X is the most graphically capable gaming console, but how does it compare to a PC with a high-end graphics card?

Some of our members who’ve been able to lease one of our new RTX 2080 Ti graphics cards will tell you that nothing can compare graphically to NVIDIA’s new series of ultra powerful GPU’s. With this new line of GPUs, video game graphics have reached never before seen heights. Real-time ray tracing has paved the way for the most realistic simulations of light in video games to date. DLSS ( an edge-smoothing technology that uses AI to boost performance and output the highest possible resolutions) support has taken graphics even further. Gaming seamlessly in 4K, gaming on a PC with a high-end graphics card edges out what the big three consoles can do in terms of graphics output.

Probably the most significant factor impacting a gamer’s platform decision is price. In terms of price, Nintendo has always been the most affordable option. The Nintendo Switch has a huge selection of great titles available on its platform, and you can pick up a Switch for only $300. Compared to Nintendo, Microsoft and Sony’s consoles are a bit more expensive. The Xbox One X retails for $499.99 and the Playstation 4 Pro will cost you $399.99.

But how does the PC stack up price-wise against the other home entertainment platforms? Simply put, not good. While PC gaming has many advantages, it is often the most costly option for playing your favorite games. Graphics cards alone can cost upwards of $2,000 – and that’s without the entire rest of your PC build! Many PC enthusiasts turn to services like ours here Cutting Edge Gamer to lease a GPU, essentially financing a graphics card with monthly payments. So if you’re looking to game affordably without having to finance a graphics card, the Nintendo Switch is the platform for you!

There’s plenty of reasons to prefer one gaming platform over the others. Maybe you like  Xbox over Playstation because of your controller preference. Maybe you like the Switch for its affordability and portability. Maybe you prefer Playstation’s exclusive game titles over the others. With PC, you have the ability to bridge many of these preferences. You can use a wide array of different controllers (including Xbox and Playstation), keyboard and mouse, joystick, etc. You can play games available on Steam, Origin, Epic, etc. Not to mention you can customize the hardware within the PC itself far more than the consoles. Simply put, gaming on a PC offers more diversity and customization. Of course there are console exclusives that aren’t available on the PC too, however. At the end of the day, like all things, your gaming selection will come down to comfort and preference.

What Is Ray Tracing?

Remember in August of last year when NVIDIA announced the launch of the brand new RTX 20 series graphics cards  and the internet exploded with speculation and mass hysteria? I do. That’s because the announcement of a new line of graphics cards – the successor to the incredibly popular Geforce 10 series – from NVIDIA was and still is a big deal.

Boasting unprecedented graphics capabilities and pc gaming performance,  the anticipation for the RTX 20 series cards was so high that NVIDIA faced extreme difficulty fulfilling initial orders for the cards during the immediate months proceeding the launch. Feeding into the anticipation was the announcement that the new RTX cards would have the computing capability to perform ray tracing in real time. Now if you’re like me, you probably asked yourself, “Well, what the hell is ray tracing?” I wouldn’t blame you for not understanding, especially after NVIDIA’s meme-able RTX ON/RTX OFF video. Dubbed “the holy grail of gaming graphics” by NVIDIA, ray tracing – simply put – is a rendering technique that “traces” a path or paths of light in a digital image to create a realistic simulation of the interaction between the light and a virtual object. Still sounds confusing, right? Let’s look at the example below. 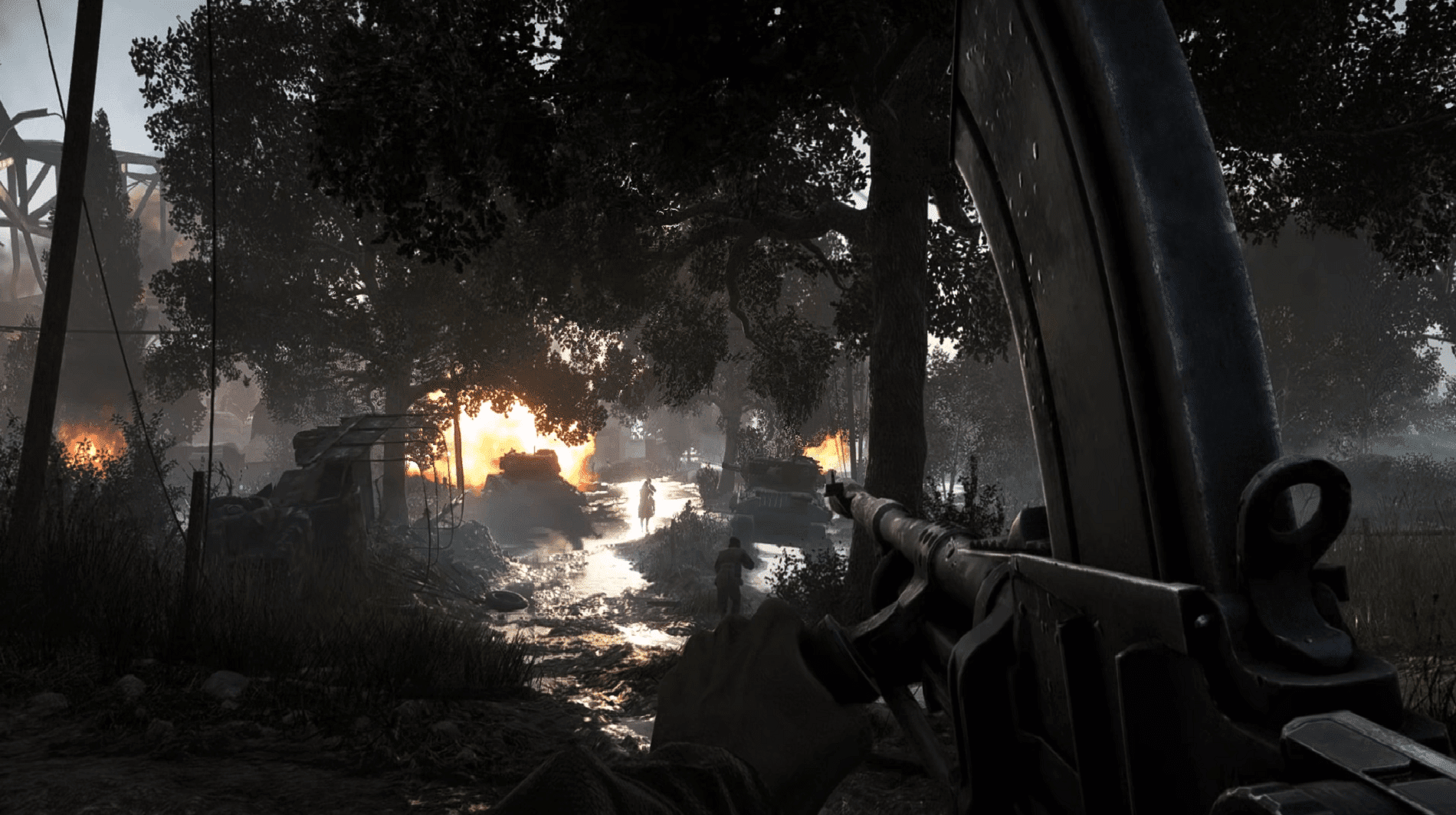 Here we have two screenshots from EA’s Battlefield V running on our testing rig using an EVGA RTX 2080 Ti FTW3 GAMING card. Both images have impressive graphics, but there are subtle differences that set the RTX cards apart from previous graphics cards. In the first image, you can see the explosion near my character, but notice how the foreground of the scene remains dark. Now look at the second image. Notice how the light from the fire illuminates the gun my character is holding and how it reflects of the puddles of water on the ground? That’s the effect ray tracing produces. Any way I decide to have my character move throughout the scene, the light from the fire will reflect off of surfaces that it normally would in real life, and adjust accordingly in real time. In contrast, in the first image you can see the fire, but you cannot see how the light from the fire illuminates and reflects off the metal on my character’s gun or the water puddles. The comparison below further illustrates the effects of ray tracing on virtual objects. 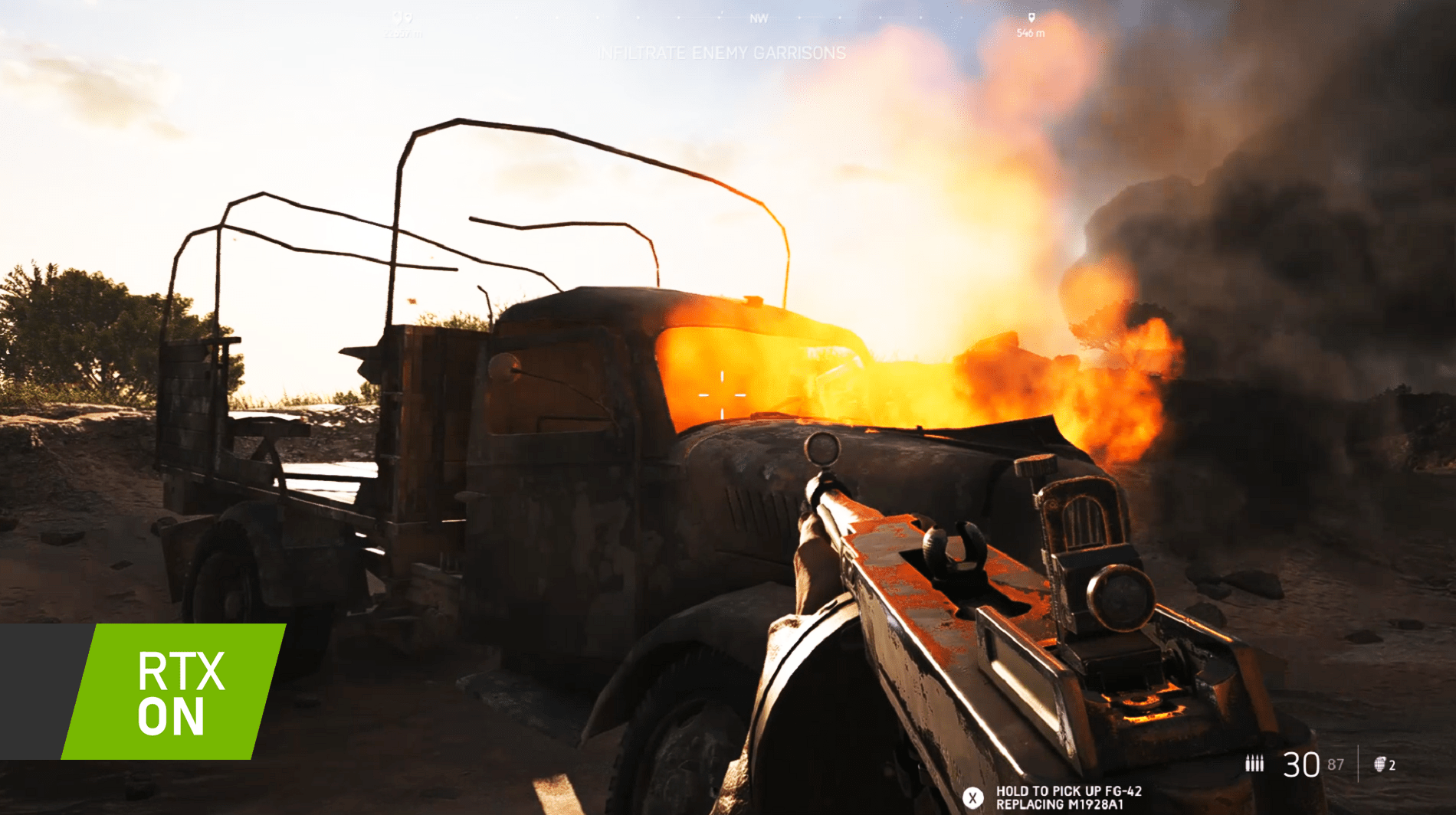 Alright now that you know what ray tracing is, you’ll need to know how to turn it on. Unfortunately, activating ray tracing isn’t as simple as slapping a RTX gpu in your system and playing a ray tracing enabled game. You’ll have to make sure you’ve completed a couple of steps first:

Once you’ve completed these steps, you’ll be able to experience ray tracing in all its glory!

Look, I know what you’re thinking. Improved lighting effects and renderings? Really? It might seem like a trivial upgrade, but real-time ray tracing is a big deal and an enormous step forward in terms of what pc gaming graphics are capable of. It uses cutting edge technology to visualize lighting in a way never before possible in real time. While there aren’t many games currently available that utilize NVIDIA’s ray tracing feature (Battlefield V, Shadow of the Tomb Raider, Metro Exodues, etc.), you will find yourself playing one that does soon, when you do remember to turn ray tracing on!

Graphics card won’t post? Artifacting issues? Over heating? Computer Crashes? Loud Fan Sounds? Driver Crashes? Sound familiar? We have seen it all during our last nine years in business. Graphics cards have issues, break or plain stop working, that’s why are here to help. Check out our guide below and hopefully some of these tips can resolve your card issues without need for an RMA!

Here are some troubleshooting tips to help isolate the issue to the graphics card:

No Display - Updating BIOS on Your Nvidia GPU

Here are some steps for flashing the BIOS of your NVIDIA GPU:

Tools that you will need:

**Once you have these tools downloaded, follow this guide for flashing the BIOS:** http://www.techpowerup.com/forums/threads/guide-for-flashing-bios-of-nvidia-gpu.119955/

It’s very important to save a copy of your current BIOS (Step 1) in case anything happens during the flashing process.

2) Run it in Safe Mode. To put Windows 10 into Safe Mode: http://www.digitalcitizen.life/4-ways-boot-safe-mode-windows-10

3) After clearing drivers, re-install the AMD graphics card into system and download the AMD driver for W10 64-bit: https://www.amd.com/en/support

2) Run it in Safe Mode. To put Windows 10 into Safe Mode:
http://www.digitalcitizen.life/4-ways-boot-safe-mode-windows-10

3) After clearing drivers, re-install the NVIDIA graphics card into system and download the NVIDIA driver for Windows 10:
http://www.geforce.com/drivers

Hopefully one of those tips was able to solve your issue. If not, you can always reach out to us via our support tickets and we can help you with our 3-5 day RMA service. 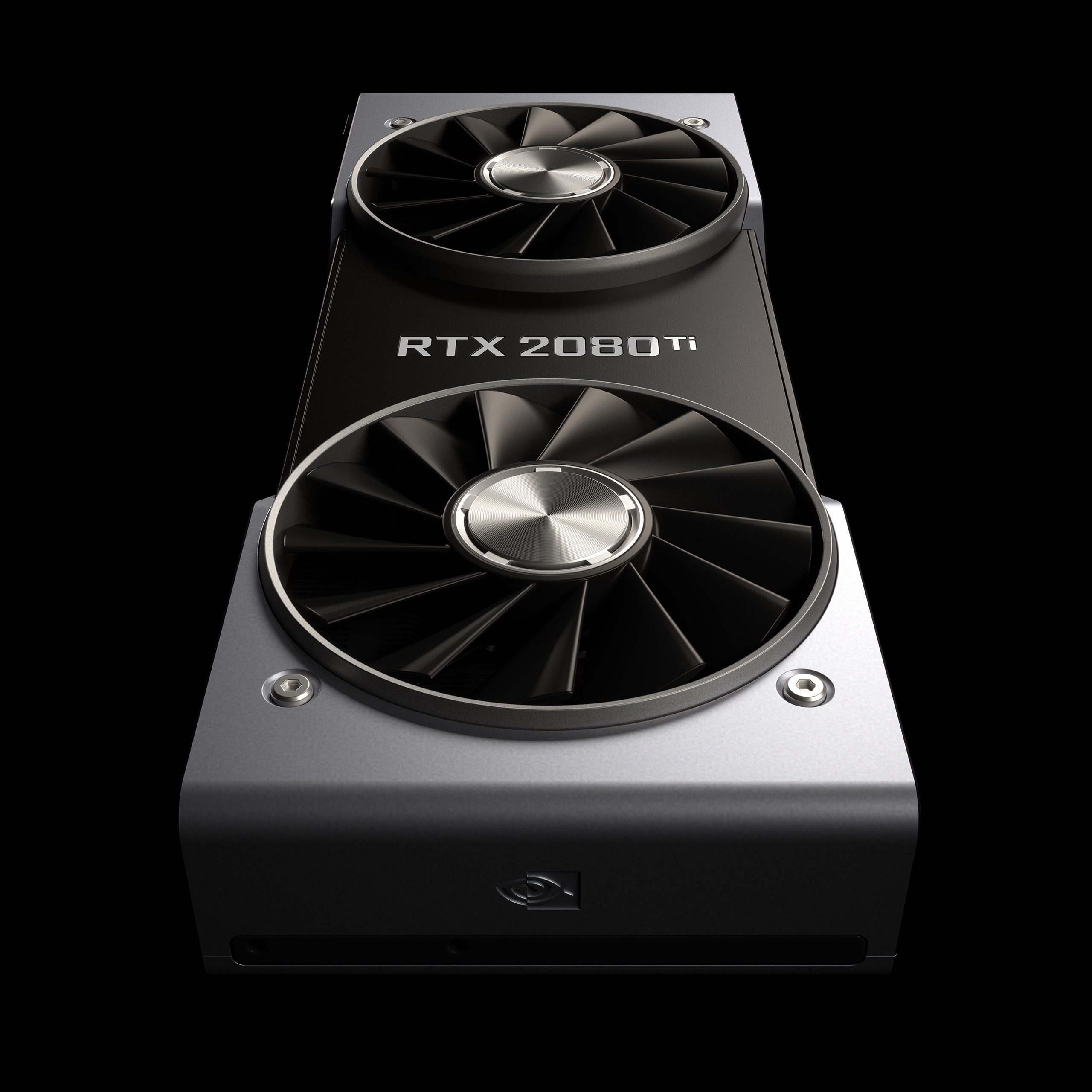 NVIDIA’s flagship new GPU, the RTX 2080 Ti, has stumbled out of the gate. Multiple reports of issues with this new launch exist on Reddit and Nvidia’s own forums. Different users are claiming to have the following issues: “blue screens, artifacts, card then suddenly stops working, artifacting issues, black flicking lines on occasion”.  And even after RMA, some are claiming the same issue reoccurring with their replacement cards.

While these reports are concerning there are several factors to consider before calling the launch a failure. For one, there is the possibility these are unreliable reports. Additionally, just as the squeaky wheel gets the grease, those with issues are going to be the loudest even if they are a small minority of actual purchasers. Finally all purchasers are still guaranteed a working card through RMA, though it may take some time. However with a price tag up to $1,899.99, and multiple delays before the actual release, consumer worries about receiving a bad card are justified.

Nvidia has responded to these complaints and their comments are reassuring. They claim that “it’s not an increasing number of users” affected and that they are working with users to resolve any issues. Additionally there do not seem to be a huge percentage of returns, retailer Overclockers UK claim a return rate of 3.5% for RTX 2080 Ti  cards, barely above their normal 3.34% return rate for their other two highest selling cards.

As more time has passed, it seems the expensive new Turing architecture RTX 2080 Ti cards did have a small manufacturing issue with some of their early production run. The cards were reported to have bad screw connections on the cooler and cold solder joints, causing some issues. Additionally the current RTX 2080 Ti cards now ship with new memory cards as they replaced the original GDDR6 memory from Micron with new Samsung memory, indicating that the old memory was unreliable.

These small changes seem to have had the intended effect, as we are starting to see less RMA’s with all of our recent batches of RTX 2080 Ti’s. While we certainly had our share of defective cards, Nvidia seem to have stepped up and resolved the issue. Now all of our new cards are running great!

Lease a new RTX 2080 Ti (with Samsung memory) from us today!