Nvidia has now created the next big thing in gaming, ray-tracing. Ray-tracing is a new technique that allows for better live 3D rendering. As silicon fabrication technology innovations slowdown and with buyers desiring a new leap instead of just packing in more transistors (looking at you Volta), Nvidia has designed new Turing architecture based cards and new RTX technology to drive them. This technology is now consumer ready and I can say it is worth the hefty price tag if you can get it.

RTX technology incorporates both classic CUDA cores with the newly designed RT cores which allow for rendering real time ray traced objects into rasterized 3D scenes in the best way possible. Below we will compare two of the highest rated RTX 2080 Ti cards, the ASUS RTX 2080 Ti ROG STRIX Overclocked Edition and the EVGA RTX 2080 Ti FTW3 ULTRA HYBRID and tell you which one we prefer. 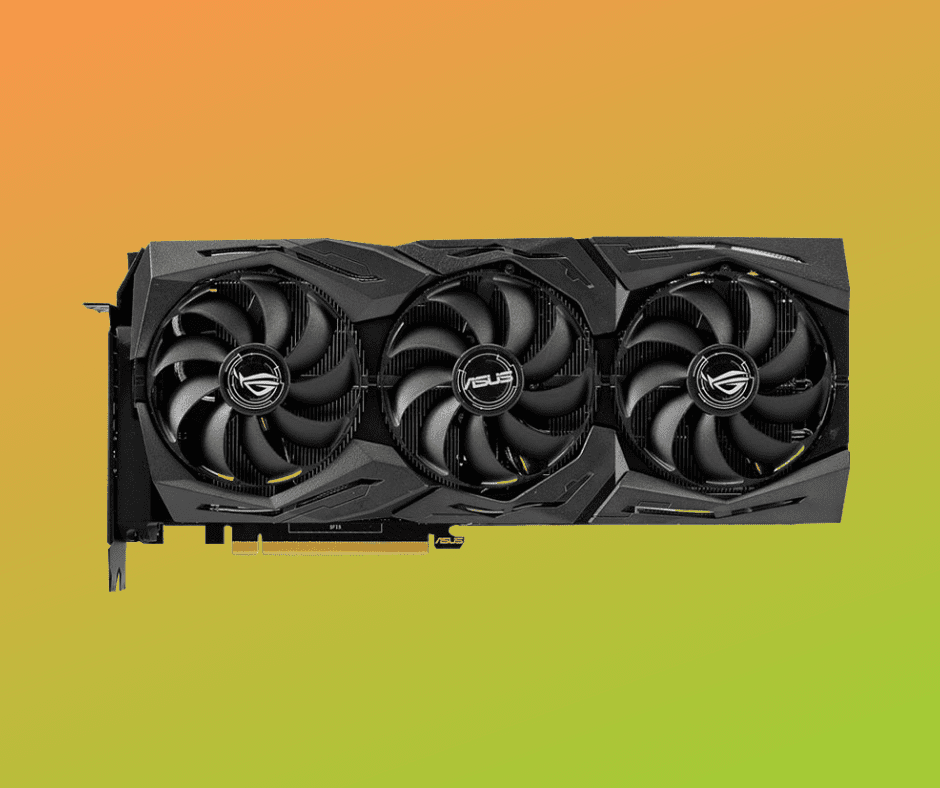 Take a look at that gorgeous beast, ASUS ROG’s flagship card the ASUS RTX 2080 Ti STRIX OC(ROG-STRIX-RTX2080TI-O11G-GAMING) is loaded with some of the best features you could hope to find on a current graphics card. It has dual-BIOS functionality, sweet lighting, newly designed fans and comes factory over clocked. Running at 1650 Mhz, which can be boosted to 1665 Mhz using ASUS’s GPU Tweak II tool, this card runs 120 Mhz faster that Nvidia’s reference design.

The dual-Bios adds some great functionality. And while not super uniquely designed, it looks almost identical to the 2080 Strix OC, the lighting on these cards is great for custom builds and can put the final touches on your new rig. The ASUS RTX 2080 Ti STRIX OC comes with a driver CD, instruction guide, and two Velcro ties in the box, which is also about identical to the 2080 Strix OC box.

Finally ASUS also redesigned their fans, increasing airflow by 27% and hopefully fixing previous issues. If you are not familiar with the ASUS cards of late they used to have big issues with fan blades breaking due to fatigue. This new design takes that into account with sturdier fan blades, but still incorporates an ugly visible multi-color fan cable.  Putting that one cable aside though, we have high hopes for this graphics card and its potential going forward. 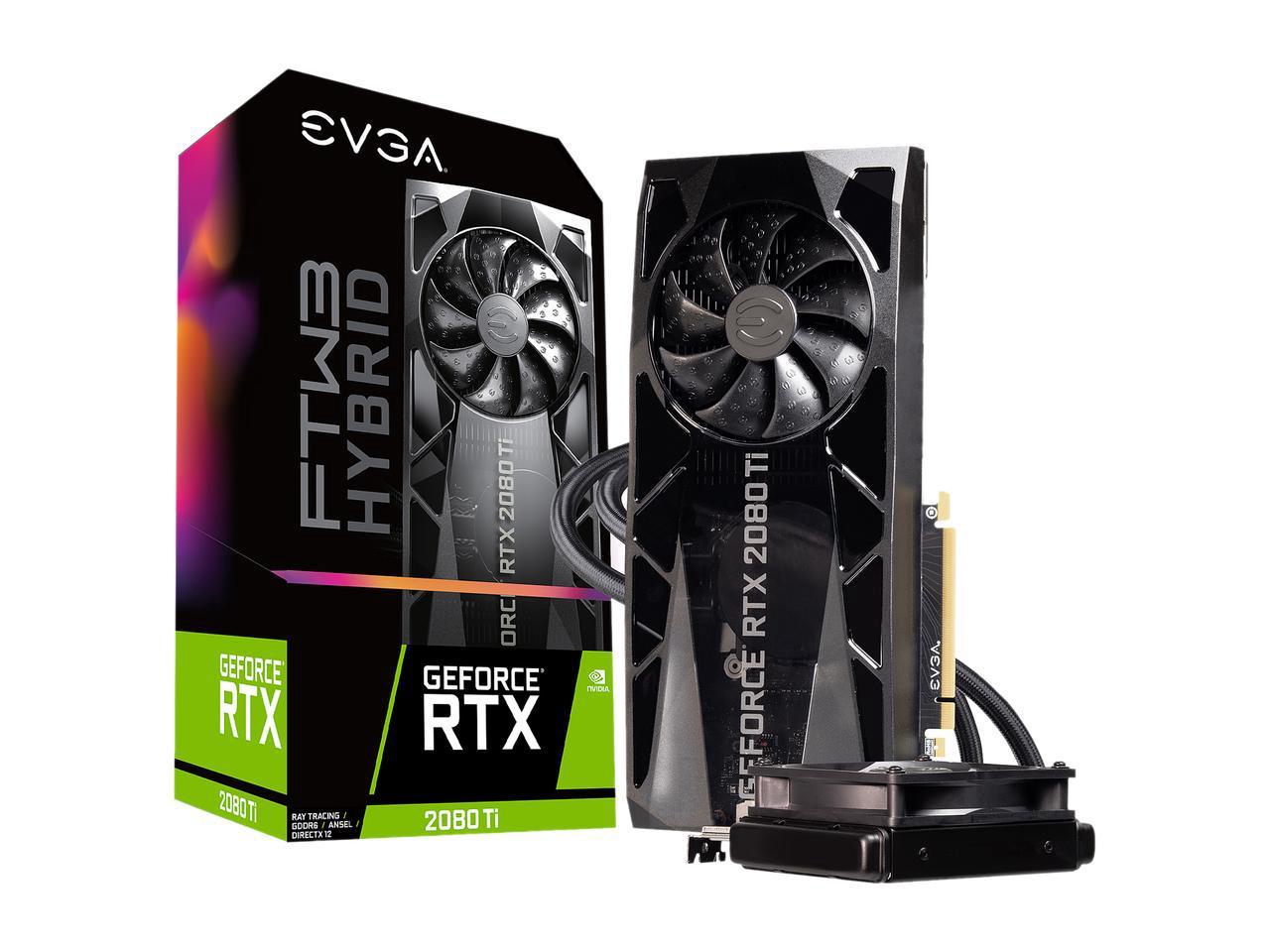 The EVGA RTX 2080 Ti FTW3 Ultra Hybrid can bring RTX to you live and let you see gorgeous game play as it was designed to be seen. This card is excellent and performs that way under pressure hitting over 220 FPS with ease and staying cool while doing it. Try BFV and you can see the ray tracing working hard, light shinning off your gun barrel and anything else reflective. This RTX 2080 Ti comes in a simple box with an instruction Guide(s) a DVI to HDMI Adapter and four screws & washers.

Pushing the frontiers of gaming visualization RTX is awesome, it looks amazing in 4K and eventually will allow for rendering full scenes with ray tracing. Lease one today and we promise you will not be disappointed! 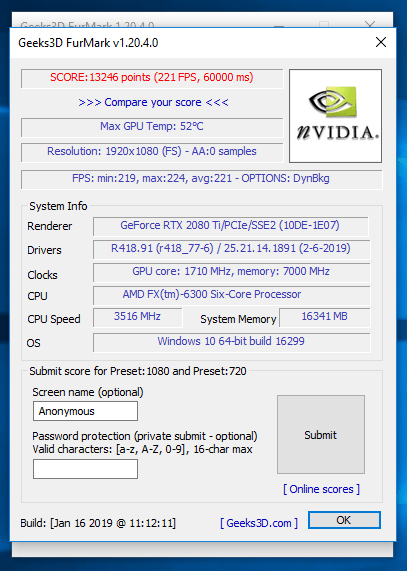 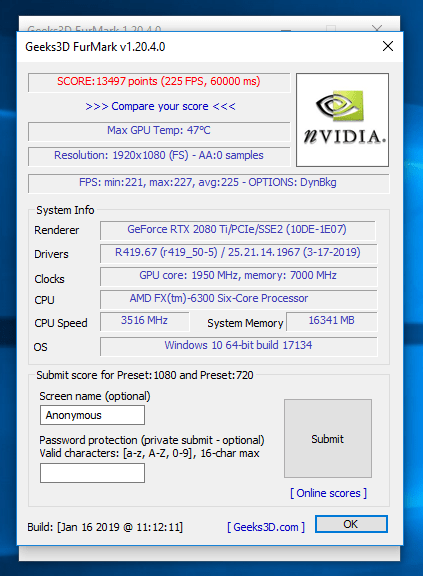 Comparing two top tier cards of this magnitude is never easy, and declaring one better than the other is nearly impossible, but don’t worry that’s why we are here. After considering the branding, style, special features and Furmarks of these cards we declare the ASUS ROG RTX 2080 Ti Strix OC to be the best in series. As ASUS fans we can say they hit this one out of the park, it boasts a clock speed of 1710MHz and just looks gorgeous. We would highly recommend this card if you are trying to get the best of the best gear, and it is available now(when in stock) through our lease to own program at only $165.99/month, and remember it only takes 13 payment at the listed lease price to buy out your card.

Please let us know below if you would like to be put on out notify list for any cards, or added to our newsletter email list!