AMD vs NVIDIA: Which one is right for your new build?

For years the two giants of the PC gaming world of graphics cards, AMD and NVIDIA, have enjoyed competition with their continuous innovation and cutting edge design. Comparisons of these companies and the GPU’s they produce are guaranteed to bring any observer to conclude this though, NVIDIA is on another level. Their top tier GPUs, the RTX Titan, the 2080 Ti and the 2080 simply put are better. NVIDIA’s GPUs produce higher frame rates, draw less power, produce less heat and come with better optimized software. However, this does not mean that AMD should be dismissed, they produce some excellent GPUs at a more affordable price killing it in the mid and low tier of cards. Priced at $449.99, AMD’s new 5700’s (pictured in the image below) are a great deal and are quite capable of rendering some quality frames. 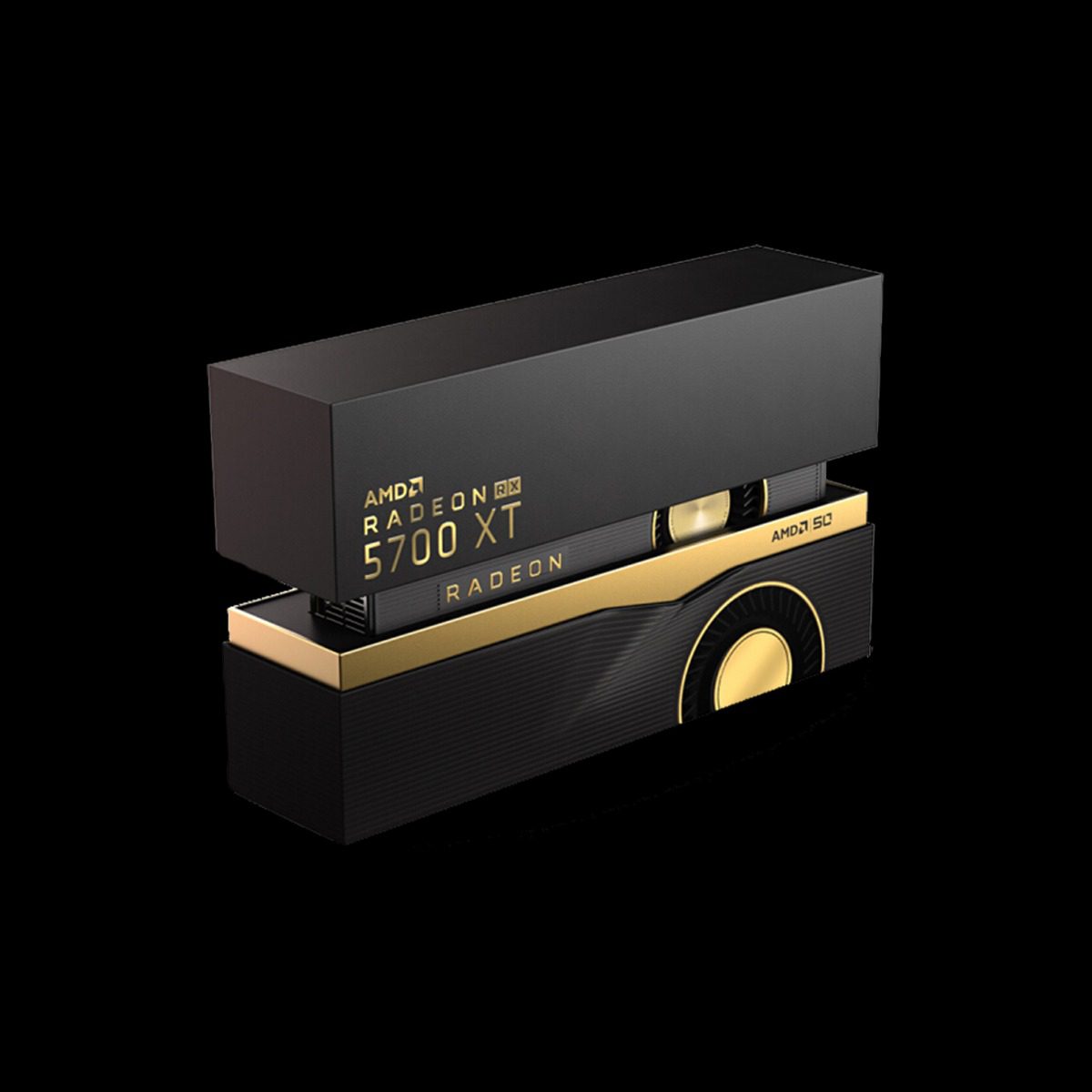 Diving deeper into this comparison, we begin to consider just how much bang for your buck the respective GPUs provide. NVIDIA’s best performing GPU, the RTX Titan blows all the competition out of the water, these GPUs boast 4608 NVIDIA CUDA cores running at 1770 MegaHertZ boost clock on NVIDIA Turing architecture featuring 72 RT cores for ray tracing, 576 Tensor Cores for AI acceleration and 24 GB of GDDR6 memory running at 14 Gigabits per second for up to 672 GB/s of memory bandwidth. All at the insane price tag of $2,499.99. For comparison the best AMD consumer GPU you can buy is the RX 5700 which costs a whopping $449.99 if you opt for the AMD Radeon™ RX 5700 XT 50th Anniversary and can be purchased for as low as $349.99 if you go with the standard 5700 edition. This card still boasts a boost frequency up to 1980 MHz running on 2560 stream processors  and 8GB of GDDR6 256-bit memory and works great for 2K gaming.

While AMD software is catching up with NVIDIA, launching competing versions of most software NVIDIA offers, AMD’s software is a little behind the ball. NVIDIA software just works better, for example let’s compare their different software products for adaptive sync and video streaming.

Both products are a version of adaptive sync designed to reduce screen tearing and improve video quality. G Sync is NVIDIA’s stellar program for this and it is a better product. Better optimized designed with better quality control, it does have one draw back. Same as always with NVIDIA, its just plain more expensive, because it only works with their own specialized monitors designed for this software and specially equipped to handle it. These monitors are not surprisingly more expensive than most but they seem to boast some of the best graphics we can render currently. AMD’s software has the distinct advantage of working with any monitors, it is just not as well optimized and does not seem to work as well, once again it comes down to a question of how much of your hard earned paycheck you are willing to drop on your new rig.

Not too much to say about these two products, once again NVIDIA is on top, as their streaming software again takes the cake. Both are capable of streaming your gaming sessions using your GPU without a capture card, but ShadowPlay has better video quality and a higher bit rate, ranging from 1-18mbps vs AMD’s ReLive which can only run at a bit rate between 1-10 mbps. Both are capped at 60 FPS and 1080p though so you may want a capture card for serious 4K streaming.

By now I’m sure that you’ve heard about AMD’s GPUs and their problem with high temperatures, and while this is true, the simple explanation for this is a difference in the architecture of the cards. NVIDIA’s Turing architecture is better designed and uses less power more efficiently in order to push out more frames. Meanwhile AMD GPUs are juiced up and need the extra power to make up for the lack of efficiency in their cards due to poor architecture. It’s as simple as that, it doesn’t make one necessarily better but when it comes to computing lower temperatures are generally preferred as heat and computers do not mix well. Funny enough it is a fact that, when your PC over heats it freezes, and that is something we all hope to avoid.

In the end, it comes down to your personal preference and price range when determining which GPU to choose. Whether you choose the RTX 2080 Ti which will provide the best performance that money can buy, or an AMD 5700 which will give you exceptional performance without breaking the bank, you’re sure to enjoy endless hours of high-performance pc gaming.

Last week, NVIDIA shook up the PC gaming world once again with the announcement of its brand new line of graphics cards – the RTX SUPER series. Due to hit shelves a mere nine months after the launch of the massively successful Geforce 20-series, the RTX SUPER GPUs arrive boasting high performance, sleek design, and low cost. In this article, I will discuss what sets the SUPER cards apart from the rest of the field.

You might be wondering what kind of performance boost a RTX SUPER graphics card will give you vs a regular RTX GPU. The answer, in short, is a big boost. Referencing the chart below depicting some recent scores from FurMark tests we ran, let’s take a look at the performance between the RTX 2060 SUPER and the original RTX 2060. 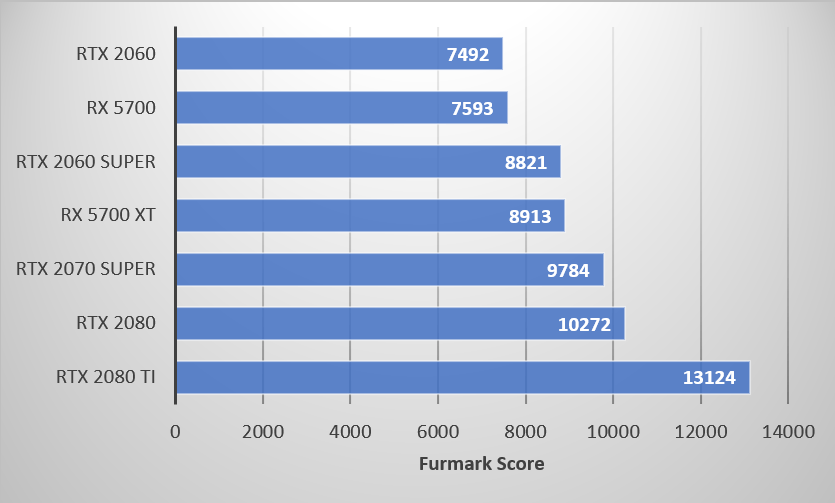 The RTX 2060 SUPER is an upgrade over the RTX 2060 in seemingly every specification category including processing cores (2,176 vs 1,920), base clock (1,470 MHz vs 1,365 MHz), video memory (8GB vs 6GB), memory interface (256-bit vs 192-bit), and more. In fact, the RTX 2060 SUPER shares many similarities performance/spec-wise with the original RTX 2070 and scores closely. Similarly, the RTX 2070 SUPER is on par (slightly lower performance) with the original RTX 2080. In addition to the performance boost, the SUPER GPUs all run NVIDIA’s Turing architecture which means that they’ll all be capable or real-time ray tracing and support other advanced gaming features like NVIDIA adaptive shading, mesh shading, deep learning super sampling, and more.

While the RTX 2080 Ti still reigns king over the growing field of PC gaming GPUs, the RTX SUPER series cards serve to fill in the gaps between the current tiers of performance. If you’re looking to get a little more out of your current GPU, upgrading to a SUPER series graphics card could provide you with a significant boost.

When AMD announced its new NAVI 5700 GPUs, it seemed like they were in a real position to secure the low-mid level pricing tier of graphics cards. Within days, NVIDIA announced the pricing for the RTX SUPER cards and all of a sudden, AMD was worried. In fact, the pricing on these new SUPER GPUs was so competitive for the performance that AMD had to lower the prices on their new NAVI cards. So what will it cost you to get your hands on one of the new SUPER cards?

So how do the NVIDIA SUPER cards compare to the AMD RX 5700 cards? We already discussed price (and the fact that AMD had to lower their pricing to compete NVIDIA’s own aggressive pricing model) in which AMD has a slight edge over NVIDIA, but is the performance worth the price?

Taking a look back at the graph of FurMark scores we referenced earlier, we can see that the RX 5700 outperforms the 2060, and that for the same price of $399.99, the RX 5700 XT outperforms the RTX 2060 SUPER. So if you’re looking for a card in that $300-$400 range, the AMD cards are very nice pickups if your looking to buy or finance a graphics card with solid performance. However, if you take a the leap and spend that extra $100, the RTX 2070 SUPER provides a significant performance leap over both AMD cards. If we go to the RTX 2080 SUPER tier, none of the other cards even come close.

In conclusion, the NVIDIA RTX SUPER series cards package considerable PC gaming performance at a reasonable cost. If you’re one of our members who recently leased a RTX 2060, 2070, or 2080 – don’t worry – we’ll have the SUPERS soon and you can always upgrade at any time!