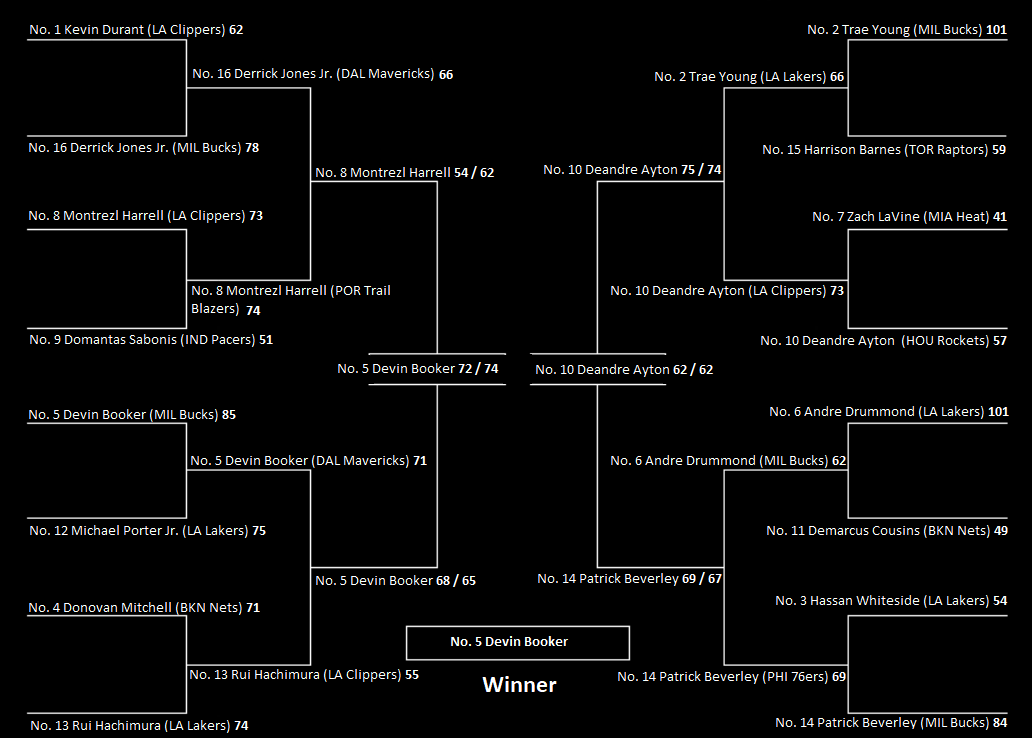 Above are all the player matchups from the tournament, you can see the players seeding, choice of team, and the games final scores.

This NBA 2k tournament is an exciting new eSports tournament put on by the NBA, featuring NBA stars playing 2K competitively against each other. The rules are as follows, it is a single elimination tournament for rounds one and two. The players were seeded by their 2K player rating, with Durant at No. 1 and Derrick Jones Jr at No. 16. Players select eight teams at the beginning of the tournament and cannot use the same team twice. The Semifinals and Finals are decided by playing best-of-three. Finally the overall winner gets to donate $100,000 of the NBA’s cash to the charity of their choice for coronavirus relief.

Finals: No. 5 Devin Booker vs No. 10 Deandre Ayton

This first one was a very competitive game, but Booker came out on top!

Number one takeaway from these games has been that Booker is the by far the better s***talker and player. He has Deandre Ayton’s number by halftime and is just entirely demolishing him by the beginning of the fourth quarter. It is so bad that even though Ayton is clearly concentrating hard he seems out of his league. Ayton says “I can’t even get mad cause I don’t even know this game” and Booker is not having it.  He just asks “What are you saying its over with already? You want me to cut it off? Want me to cut it off?” to which Ayton meekly responds “No”. At this point its 61-47 Nuggets with 4:17 left to play and the game is already over. Booker continues to talk trash throughout as expected after all he went undefeated throughout the entire tournament.

Overall the tournament was a good fun, a great way to provide entertainment for fans of the NBA and donate to a good cause all at once. Booker chose to split his winnings between #FirstRespondersFirst and Arizona Food Bank Network. Who do you think will win next year? Let us know if the comment section below!